Bangkok is reputably a city with the largest urban concentration of night markets in Southeast Asia, becoming something of a nexus for bargain hunters and savvy entrepreneurs. From long-time fixtures such as the Chatuchak Weekend Market to purpose-built commercial developments like the Asiatique Riverfront Market and niche markets that include the Rod Fai Market with its focus on vintage-style goods—the significance of night markets in Bangkok as a leisure activity for some and a livelihood for others is an interesting dynamic for this city on the rise.

Just as fashion trends evolve, Bangkok’s night market scene has also experienced a surge of transformation in recent years. During a trip to Bangkok in May 2016, I visited one of the newest “kids on the block” (literally and figuratively) that is revamping the concept of a night market.

Launched in 2015, Artbox is a “pop-up” market erected from metal shipping containers and other mobile materials. The portability of these construction elements allow Artbox to rove from one site to another—setting up shop in vacant lots around the city for a temporary period of time. The adaptability of Artbox to pop-up in various locations is one novel aspect but, arguably, the more creative (if not marketable) feature of Artbox is its positioning as a “hipsteresque” agora where local designers and young entrepreneurs can ply their trades. 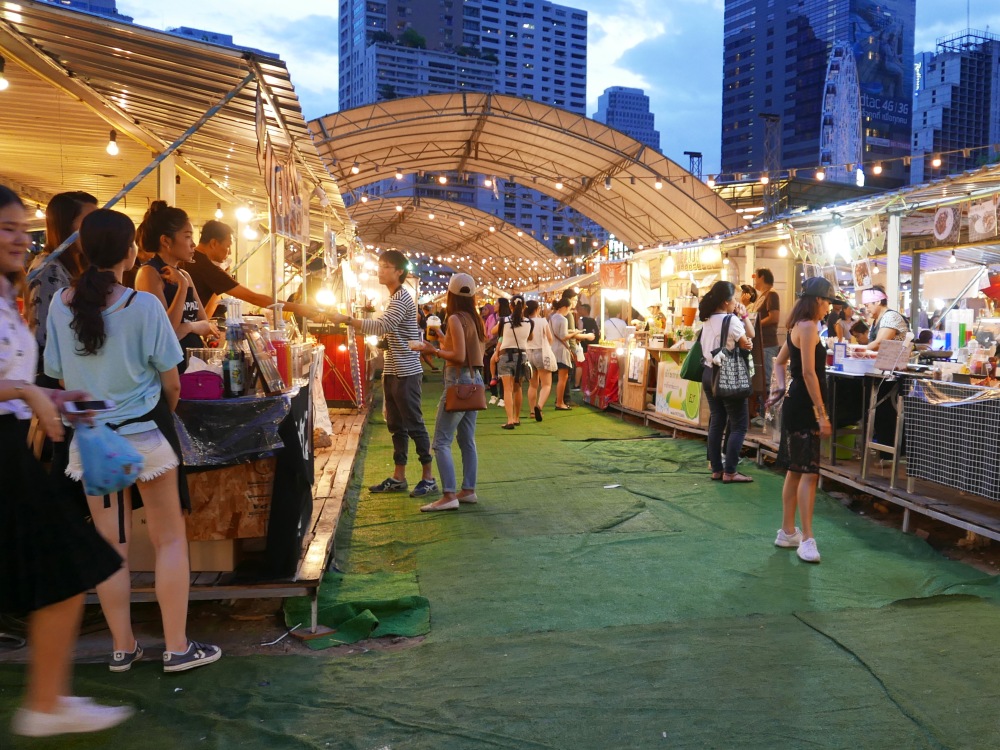 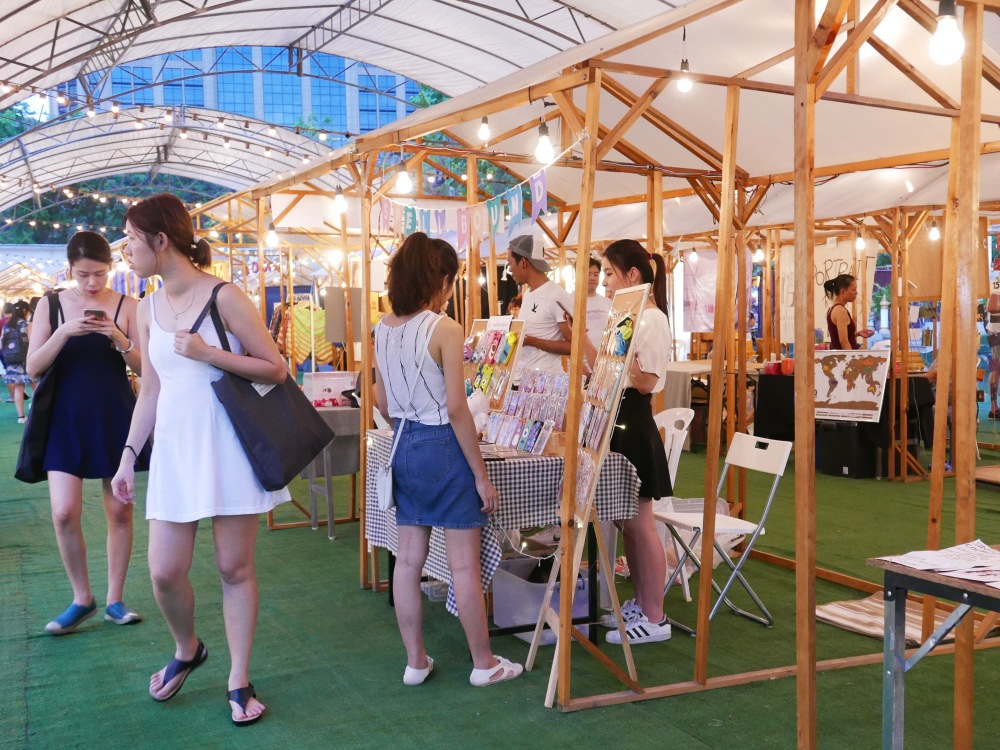 My visit to Artbox took place on a weekend in the neighbourhood of Phrom Phong, where the market was then occupying a vacant lot ideally situated a short distance from the eponymous BTS station. It became very apparent from the “designed” entranceway that this market would not be an ordinary night bazaar. 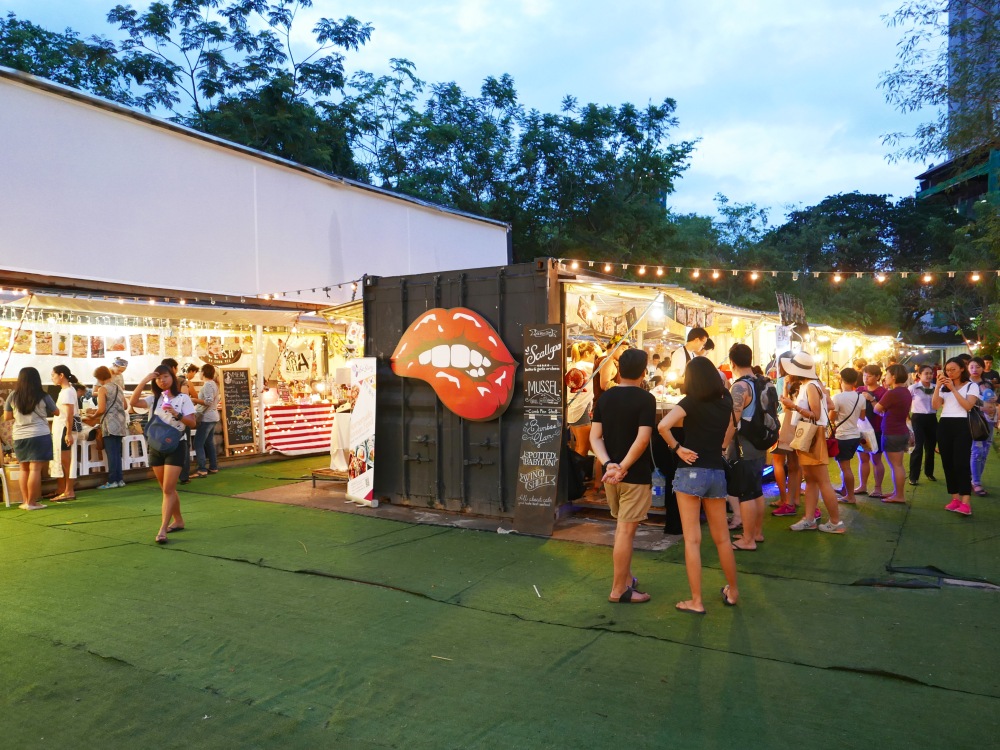 The whimsical quality and creative vibe that Artbox exudes are by no means an accident of spontaneity but, rather, a feat of organized and strategic planning. That so much planning would be exerted for a temporary market that “comes and goes” speaks to the vision of Artbox as more than just an avant-garde concept—it is on a path towards (re)defining the culture (and economy) of night markets in Bangkok.

Artbox vendors are eager to demonstrate their pride in the products and services that they sell. What might be a typical lemonade stall is, instead, a carefully curated soda bar complete with two bartender-entrepreneurs with a knack for concocting immaculately decorated beverages. Other local creative talents include portrait artists of whom the more popular ones (if, unless, you can get to them early) have a 1-hour waiting list long before the curtain is dropped on this theatrical night market. 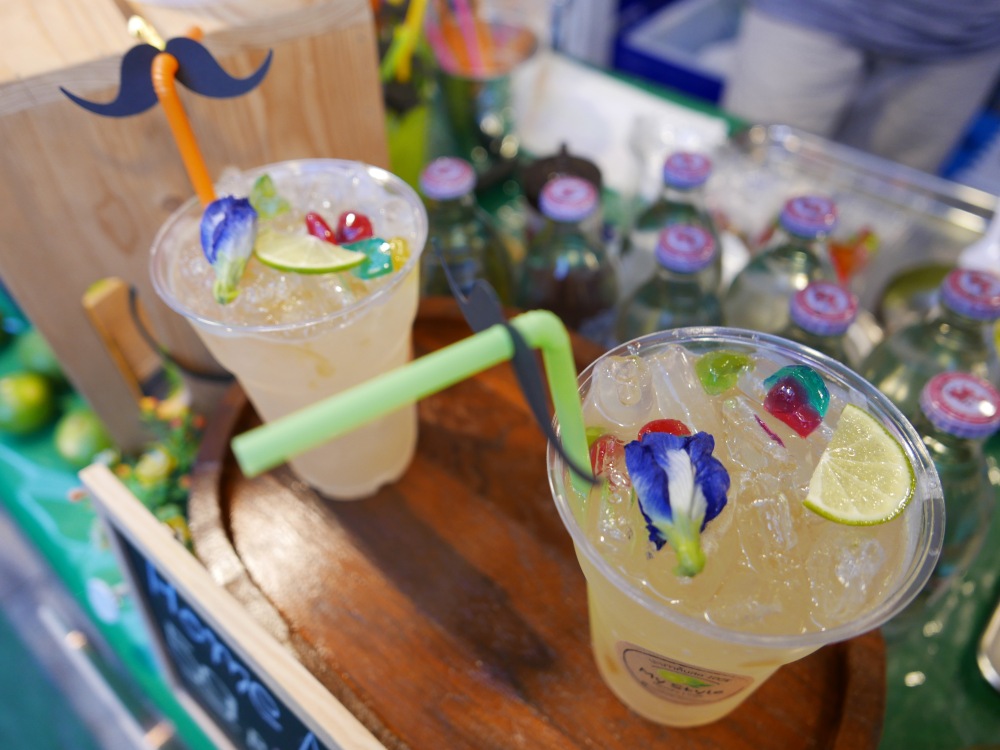 On the one hand, Artbox signifies a burgeoning creative industry in Bangkok that is helmed by young local entrepreneurs and supported by young local consumers (the demographics of the crowd serves as a strong indicator of the target market). More significantly, the popularity of Artbox has grown beyond the city boundaries of Bangkok, as it would seem, going by a recent post on its Facebook page which announced that the market would be popping up on the shores of Singapore. The tagline, “It’s Time to Move On”, is apt. The Singapore version of Artbox, from 28-30 April 2017 and 5-7 May 2017, will be host to around 64 food & drinks stalls and 256 fashion & lifestyle vendors. The “mobility” factor of Artbox, therefore, can be read on two levels. Firstly, as a mobile yet community-oriented marketplace akin to the early trading traditions of roving caravans. Secondly, as a “glocal” movement towards micro enterprises and curated consumerism.

On the other hand, Artbox also signifies an underlying process of gentrification. Gentrification of the night markets. In a citywide initiative to clear streets and pavements of itinerant hawkers—an effort which began in 2015 and has resulted in the removal of almost 15,000 vendors (Sauers, 2016)—the Bangkok Metropolitan Administration could very well be advancing this process of gentrification. What then of the urban life in public spaces once teeming with commercial activity that contributed to a bustling street economy? How will urban life, void of street vendors, be reinstated? More crucially, how will these public spaces be “[returned] to the Bangkok people” (Dr Nattapong in Tan, 2017)?

Perhaps the concept of a community-oriented “pop-up” market, with its many possible permutations of temporality, locality, and diversity, might provide the starting point towards a place- and people-centric solution.

Image Credits: All images are the property of Su-Jan Yeo unless otherwise stated.